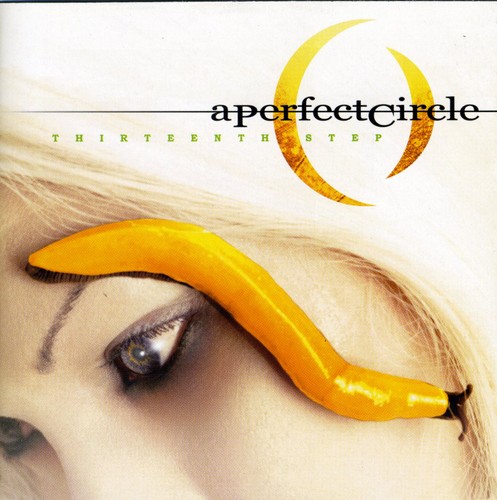 A Perfect Circle is a Los Angeles-based band, and their new album "THIRTEENTH STEP" is a remarkable collection of creative un-caterizable modern music. Tracks include: "The Package", "Weak and Powerless","The Noose" and many more. Formed by "Tool" members Maynard James Keenan, and Billy Howerdel.

''Thirteenth Step'' is the second studio album by American rock band A Perfect Circle, released under Compact Disc format on September 16, 2003. It was a major success reaching the #2 position on the Billboard 200 in its premiere week, selling over 231,000 copies and staying on the charts for 78 weeks. The RIAA certified it as gold on November 4, 2003 and as platinum on March 24, 2006. The first single from the album was "Weak and Powerless", followed by "The Outsider" and "Blue". The tracks have their remixed versions on a 2004 remix album ''aMotion''.

According to Keenan on the commentary for the ''aMotion'' DVD, the album is a concept album with all of the songs dealing with the problem of addiction from a different perspective. He said that it refers in a way to his 13 years of residence in Los Angeles. Intentionally or otherwise, the title also evokes Alcoholics Anonymous and other 12-step programs, where the term "thirteenth-stepping" denotes inappropriate sexual advances toward a person who is early in their recovery, or has little sobriety time..

The cover art features a banana slug crawling across a woman's face.

"The Nurse Who Loved Me" is a cover of the song by Failure, originally featured on the 1996 album ''Fantastic Planet''.

"Pet" has its follow-up, "Counting Bodies Like Sheep to the Rhythm of the War Drums", with the same lyrics, on the band's following 2004 cover versions album ''eMOTIVe''. - Wikipedia