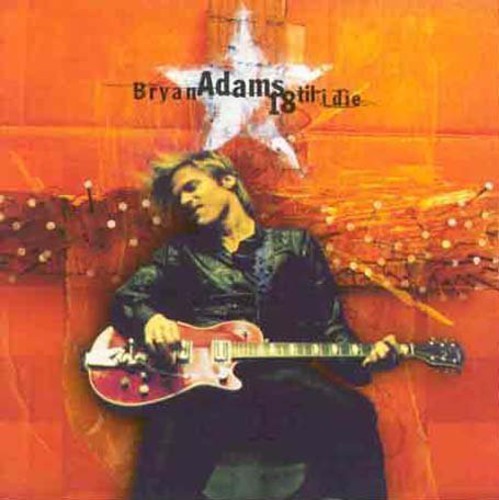 With over 20 million albums sold domestically, Brian Adams has more than proven himself as a songwriter. His ninth A&M release was produced by Mutt Lange (Shania Twain, Def Leppard, ACDC) and features the single/video "The Only Thing That Looks Good on Me Is You," "18 Til' I Die," "(I Wanna Be Your) Underwear" and the hit single "Have You Ever Really Loved a Woman." Brian will be appearing on the VH-1 Honors Show and the VH-1 Duets program with the Brian Setzer Orchestra.

''18 til I Die'' is the seventh studio album by the Canadian rock artist Bryan Adams. Released on June 4, 1996 through A&M Records, the album became a commercial success peaking at #1 in United Kingdom and number two in his homeland Canada. It was recorded on different locations which included Jamaica and France. The album was panned by critics, saying he was trying to be youthful while sounding more like "having a mid-life crisis". While previous albums by Adams had all been quite consistent in terms of production and songwriting qualities, ''18 Til I Die'' was somewhat of a patchwork, making up of schmalzy ballads (i.e., ''I'll Always Be Right There'', ''I Think About You''), blues orientated rock tunes (i.e., ''Black Pearl'', ''Do To You''), and soundtrack songs (''Have You Ever Really Loved A Woman?'', ''Star''). The albums was poorly received by fans in the US and sold only about 1,000,000 copies there. It became his last platinum album in the USA. Adams launched a world tour : "18 til i die" tour in May 1996 in Tallinn, Estonia. "The Only Thing That Looks Good On Me Is You" was released as the first single on May 28. This is the first Adams album not to include a Jim Vallance song, who has occasionally been vocal on the record's lyrical content (specifically concerning the song ''(I Wanna Be) Your Underwear'').

Five singles have been released from the album: "The Only Thing That Looks Good on Me Is You", "Let's Make a Night to Remember", "I'll Always Be Right There" (promotional release only, and as Mother's Day greeting card in 2000), "Star" and "18 til I Die". The album was released in June. To promote the album, Adams toured around North America and Europe.