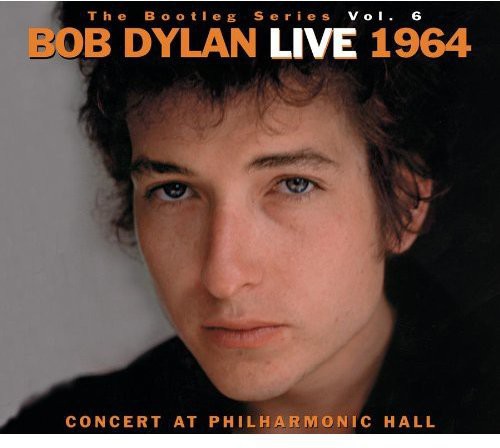 This recording captures Dylan at a transitional moment in his career: two months after the release of ANOTHER SIDE OF Bob Dylan, the last solo acoustic album he would record, and just weeks before he embarked on the electrified rock experiment that would result in BRINING IT ALL BACK HOME. Also featuring Joan Beaz on 4 songs.

''The Bootleg Series Vol. 6: Bob Dylan Live 1964, Concert at Philharmonic Hall'' is a complete recording of Bob Dylan's October 31, 1964 "Halloween" show at New York's Philharmonic Hall. It was released in 2004.

The set list was dominated by Dylan’s protest songs, including "The Times They Are a-Changin’," "A Hard Rain’s a-Gonna Fall," and "The Lonesome Death of Hattie Carroll". Joan Baez, a major supporter of Dylan's in his early career, duets with Dylan on three songs, as well as singing another alone ("Silver Dagger"). However, Dylan performed these songs alongside early versions of three songs from the soon-to-be-recorded ''Bringing It All Back Home''. New compositions like "It’s Alright Ma (I’m Only Bleeding)" and "Mr. Tambourine Man" showed Dylan moving in a new direction, becoming more immersed in evocative, stream-of-consciousness lyrics and moving away from social, topical songwriting. Even as he was moving in this new direction, Dylan was still portrayed as a symbol of the civil rights and anti-war movements, and the Halloween concert of 1964 caught Dylan in transition.