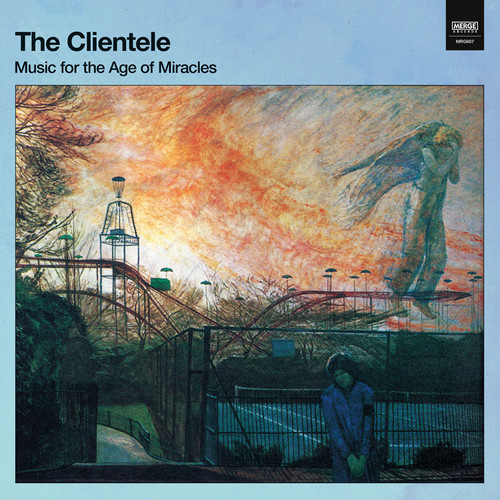 The Clientele return in September with Music for the Age of Miracles, their first release of new music since 2010’s Minotaur EP. After The Clientele released Minotaur, Alasdair MacLean, singer and principal songwriter for the band, made two wonderful albums with Lupe Núńez-Fernández as Amor de Días, issued a Clientele best-of called Alone and Unreal, oversaw reissues of Suburban Light and Strange Geometry, and played shows solo or as part of those bands. He and Lupe have also been raising a family, so the prospect of a new Clientele record seemed to be diminishing. It seems fitting, then, that a chance meeting with a ghost from the past/future is what led to Music for the Age of Miracles, the first album of new Clientele songs in seven years. MacLean and Anthony Harmer knew one another and played music together in the mid-1990s but had lost touch. “I had often wondered what had happened to Anthony since,” writes MacLean. “It turned out—he told me—he’d studied the Santoor, an Iranian version of the dulcimer, and over decades become a virtuoso, at least by my standards. He suggested we have a jam together. Ant and I now lived three streets away from each other, it turned out. He started to arrange my songs. He let me write and sing them, and he came up with ideas for how they should sound. This carried on until we had an album. I called up James and Mark and asked them if they wanted to make another Clientele record. They did, and this is it.” So, a new collaboration with an old acquaintance led to a new Clientele album. On Music for the Age of Miracles, Harmer joins the line-up of MacLean, James Hornsey (bass), and Mark Keen (drums, piano, percussion), contributing string and brass arrangements as well as guitars, vocals, keyboards, saz and, yes, Santoor. There’s something rapturous about the ways in which tracks such as “Falling Asleep” and the exquisite “Everything You See Tonight Is Different From Itself” stretch out in choral harmony and rhythmic syncopation. In addition, Alasdair’s lyrics create a series of linked, impressionistic stories or poems, even if their exact meaning may be obscure. There is the recurring imagery in the songs of Orpheus, the lyre, empty houses, sleep and sleeplessness, and the constellations of Lyra and the Pleiades. This process reaches a musical, thematic and emotional peak at the climax of the album’s final song, “The Age of Miracles.” MacLean sings as the music swells around him, bringing musical and lyrical resolution to this record, creating an extraordinary impression of harmony, in all senses. Birth, rebirth, the ghost in the trees, something on the edge of sight, the faces we love, childhood, parenthood, the dance of our days; music for the age of miracles indeed.
This website uses cookies to personalize content and analyse traffic in order to offer you a better experience.
I accept Learn More
back to top