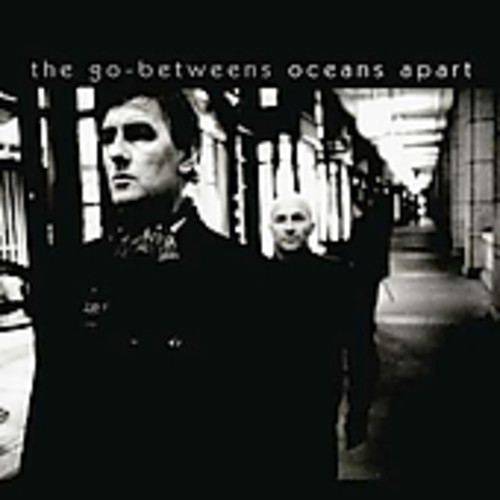 The Go-Betweens are the quintessential cult band. Sired by the new wave explosion of the late 70s, he Go-Betweens have spent the last 25 years crafting the sort of lovely, eloquent music. OCEANS APART is their brand new album featuring 16 tracks of lush music.

On first listen, the '80s Go-Betweens were an appealing shambles-R.E.M. or Robyn Hitchcock without the strong voice, Television or the Clean without the musical snap. Gruff, oblique singer-guitarists Robert Forster and Grant McLennan were like a musical version of romantic leading men Hugo Weaving and Russell Crowe in the 1991 movie Proof, a later understated and revered Australian export, before the actors went Hollywood and started smashing things. It took the Go-Betweens' ten-year reunion album in 2000, The Friends of Rachel Worth, to bring into focus the beauty non-fans were missing, thanks in part to backing musicians (the members of Sleater-Kinney and bassist Adele Pickvance) who knew how to streamline the songwriters' lushness. Today I hear in those (reissued) old albums a melodic sensibility so mysteriously delicate that stronger singers would ruin it.

Now comes the grand sound of Oceans Apart, for which Forster rejoined McLennan in Brisbane, relocating from Germany, and reforming the Go-Betweens as a permanent band, with Pickvance on bass and Glenn Thompson on drums. The same lineup recorded 2003's comparatively flat Bright Yellow Bright Orange, but this new album feels like the payoff of that previous rehearsal, with Mark Wallis, the band's late '80s producer, back mingling palatial hooks with female harmonies (Pickvance stepping to the fore), lustrous acoustic strums, and unnameable chamber echoes. Forster's "Here Comes the City" suffers in comparison to the Go-Go's' "Turn to You" or the Pixies' "Velouria," lifting the ooo-la-la of the former and the theremin of the latter. But by the fifth song (and 21st listen), the album has made its own typically subtle claim on new-wave eternity. "And to know yourself is to be yourself," sings McLennan before a cello weaves its indelible coda through "Boundary Rider." The Go-Betweens know themselves better than ever.