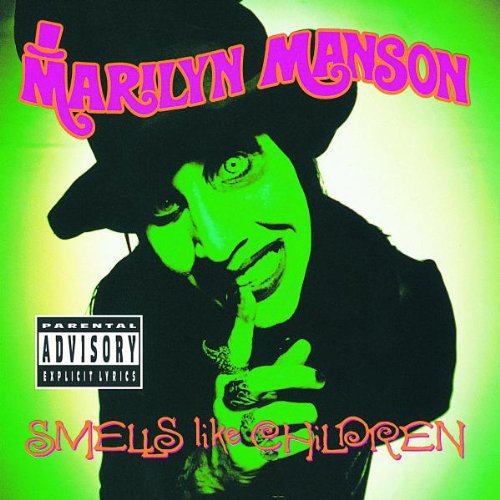 A year on from Portrait of an American Family, Marilyn Manson released the stopgap EP Smells Like Children. Where the full-length debut showed sparks of character and invention beneath industrial metal sludge, Smells Like Children is a smartly crafted horror show, filled with vulgarity, ugliness, goth freaks, and sideshow scares. Manson wisely chose to heighten his cartoonish personality with the EP. Most of the record is devoted to spoken words and samples, all designed to push to the outrage buttons of middle America. Between those sonic collages arrives one new song, retitled remixes of Portrait songs - "Kiddie Grinder," "Everlasting Cocksucker," "Dance of the Dope Hats," "White Trash" - and three covers ("Sweet Dreams," "I Put a Spell on You," "Rock 'n' Roll Nigger"), all given a trademark spooky makeover. Musically, it may not amount to much - it's goth-metal-industrial, as good as the "Dope Hat," "Lunch Box," and "Cake and Sodomy" trilogy that distinguished the debut - but as a sonic sculpture, as an objet d'art, it's effective and wickedly fascinating. It's exactly what Brian Warner needed to do to establish Marilyn Manson as America's bogeyman for the late '90s. [And it also helped enhance his myth for his fans. Smells Like Children originally was released promotionally, complete with unauthorized Willy Wonka & the Chocolate Factory samples and other unapproved sound bites. It was pulled, censored, and re-edited ("Abuse, Pt. 1" and "Abuse, Pt. 2" were removed from the EP) before it was officially released in October 1995, and the original promo copies became valuable collectibles and the most bootlegged item in the Manson catalog.
This website uses cookies to personalize content and analyse traffic in order to offer you a better experience.
I accept Learn More
back to top