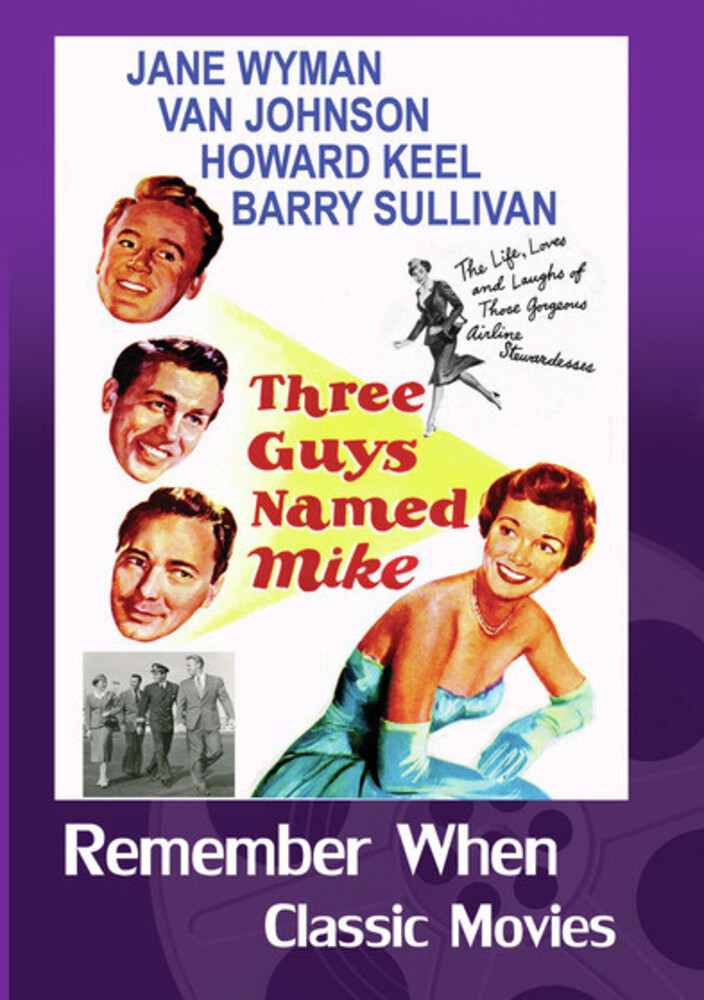 Three Guys Named Mike is a 1951 American romantic comedy starring Jane Wyman, Van Johnson, Howard Keel and Barry Sullivan. Marcy Lewis (Jane Wyman) from Indiana has an ambition to become an airline cabin attendant and see the world. Her first flight nearly costs Marcy her job when she inadvertently offends pilot Mike Jamison (Howard Keel) and she forgets the passengers' food. Mike intervenes for Marcy and she is given a second chance. Marcy moves to Los Angeles for her job and meets a passenger, Mike Lawrence (Van Johnson), who is a graduate research student in science. Then Marcy nearly loses her airline cabin attendant's job again by permitting a young passenger to keep her dog in the cabin, against the airline's rules. Marcy gets suspended for a week. Marcy then meets another man named Mike when Mike Tracy (Barry Sullivan) helps her when her car stalled. Mike Tracy works for a Chicago advertising agency and Marcy comes up with an idea to have cabin attendants endorse soap. Mike likes the idea and soon Marcy is invited by a photographer to pose for magazine ads herself. All three Mikes show up to help Marcy move into her new bungalow and they are all jealous of one another. Marcy keeps all the Mikes straight by naming Mike for Mike Tracy, Mikey for Mike Lawrence and Michael for Mike Jamison. When Marcy's photographer calls her to do one more photo for the ad campaign, all three Mikes begin a brawl since the photographer is getting fresh with Marcy. All three Mike's get their pictures in the newspaper regarding the brawl, and all three men get into trouble with their employers. Marcy tries to intervene and while doing so, all three Mikes propose to her. This is a fantastically funny, romantic comedy which you will soon not forget. This is a real treasure and keepsake of a film!